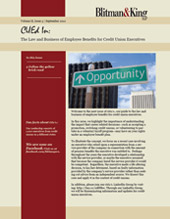 Welcome to the next issue of CUEd In, our guide to the law and business of employee benefits for credit union executives.

In this issue, we highlight the importance of understanding the impact that career related decisions—such as accepting a promotion, switching credit unions, or volunteering to partake in a voluntary layoff program—may have on your rights under an employee benefit plan.

In addition, please join our CUEd In LinkedIn Group by visiting: http://tiny.cc/ud88kw. Through our LinkedIn Group, we will be disseminating information and updates for credit union executives.

Executives of credit unions who participate or seek to participate in a Supplemental Executive Retirement Plan (“SERP”) need to understand the benefit formula of the SERP, the impact that promotions, terminations and career related decisions may have on the calculation of benefits and their rights under the SERP. This is particularly true, as we discussed in our last issue, due to the complex nature of challenging the decisions of SERP plan committees, how courts review SERP plan committee decisions and the standards that apply. In short, it is always better to receive an opinion that you can rely on from an independent employee benefits counsel to determine the impact that a career related decision may have on your right to receive pension and other benefits. A recent case involving an executive that relied upon a representation from a service provider of the company provides an unfortunate, but realistic, example.1

On November 3, 2008, Duncan was provided with a letter confirming his termination and notifying him of this estimated benefit. Duncan responded that, had he known this was the actual amount instead of the $1,234,572 he anticipated, he would never have volunteered to be terminated.

Executive files lawsuit alleging additional benefits due under SERP. In response, Duncan brought suit in Federal District Court against BCI based on the alleged negligent misrepresentation in the January 1, 2008 statement.

Duncan alleged that he was induced to volunteer for retirement or a termination from LP because the benefit statement, as he had understood it, indicated that he was entitled to receive a significantly higher SERP than actually paid.